In a previous post, we analyzed millions of hostel reviews to come up with the most up-and-coming backpacker destinations. As we were analyzing the data for that post, we discovered a pretty noticeable phenomenon: as a major hub became popular, other regional cities grew as well, but with a short delay as the market caught up. It’s something we’re calling Tourism Contagion.

Anecdotally, this makes sense - if you’ve ever gone on an extended backpacking trip, you know how easy it is to find recommendations of the next cities to visit. Whether you land in Bangkok, Buenos Aires, or Barcelona, other travelers are always eager to tell you about the new, untouched “hot spot” just a short bus or train ride away.

From a wider economic view, it also makes sense that “new” tourism destinations can only remain new for so long, and it’s inevitable that travelers and tourism providers will begin to spread through a country or region as the market develops. We decided to take a closer look at this "tourism contagion" phenomenon to understand more about how it develops.

We started with our dataset of over 3.5 million hostel reviews taken from over 3,000 properties over 14 years on HostelWorld. We then segmented these by city, country, and region so that we could begin to measure annual growth.

It is important to note that this article analyzes the growth of online travel reviews. We are using this as a proxy for overall growth in the backpacker community, but these figures could indicate simply indicate hostels "coming online". Many hostels were likely serving guests for many years before they made themselves available on HostelWorld.

We found that secondary cities started to grow around 2-3 years after the hub cities became popular. As travelers moved to these secondary cities, they acted as hubs for new destinations nearby.

To visualize this phenomenon, let’s take a look at the explosive growth of Southeast Asia in the last 12 years.

Bangkok started to pick up on the backpacker circuit in 2008, reaching over 1,000 reviews generated that year. This contagion quickly spread to other regional hubs and by 2011, Chiang Mai, Siem Reap, Hanoi, and Ho Chi Minh City were each generating over 1,000 reviews per year as well. As these new hubs grew, we see the next set of destinations coming online, like Pai, the Thai Islands, Phnom Penh, Hue, and Hoi An. You can see this in another way with the following graph: 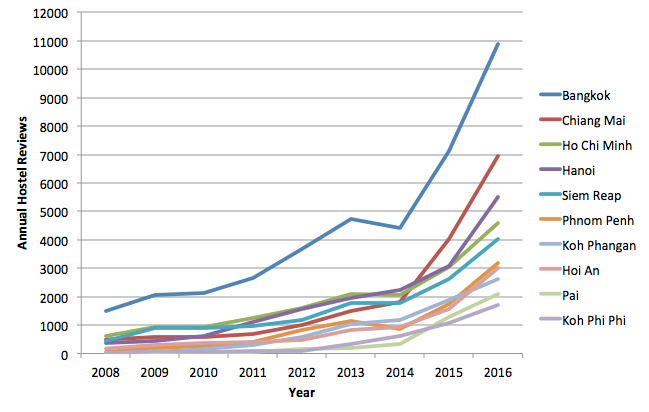 To make it easier to read, here's the same graph up to 2015, excluding Bangkok: 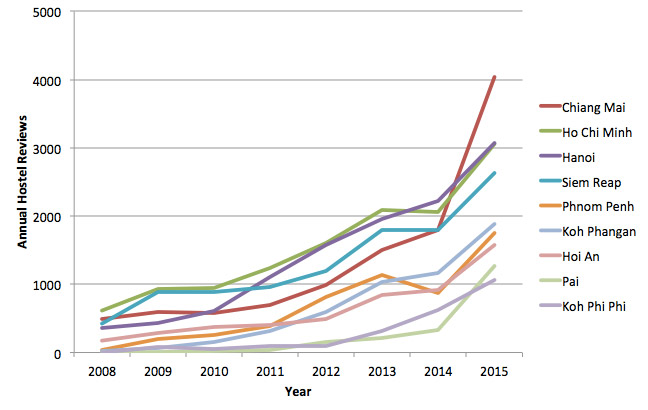 Every 2-3 years another set of destinations become popular. We are starting to see cities in Laos and the Bali-area picking up, so expect to see them all over Instagram in the coming years.

We see this same effect in Central America.

In 2012 some cities in Costa Rica and Panama were starting to gain in popularity, while the Mexico City to Yucatan circuit was growing as well. Fast forward to 2016 and we see that the two routes have nearly converged, with travelers now venturing into Nicaragua, Belize, Guatemala, and Honduras.

In East Asia, we see the trend continue with major Chinese, Japanese, Taiwanese, and Korean cities driving tourism in smaller nearby cities in their respective countries:

Interestingly, East Asia has not seen the growth in hostel visits like Southeast Asia. In the last few years, with the exception of Japan, the number of cities coming online and the overall review count has remained stagnant or declined: 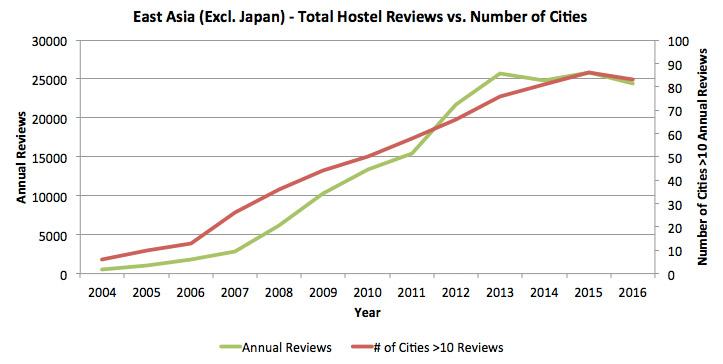 We found that the travel market grows and spreads throughout a country or region from major hubs to secondary cities, something we’re calling Tourism Contagion. This pattern doesn’t show any signs of slowing down either, so be on the lookout for the next up-and-coming hot spots.

How We Created the Visuals

The animated maps were created in two steps. First, we created one frame for each year using Tableau. We then used Photoshop to fade each frame together and create a gif. You can see the PSD we used to create Southeast Asia here 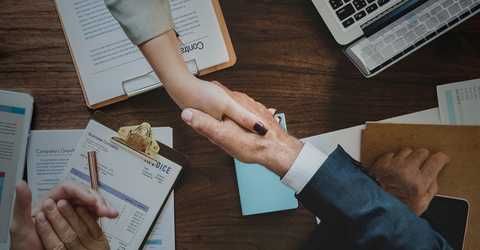 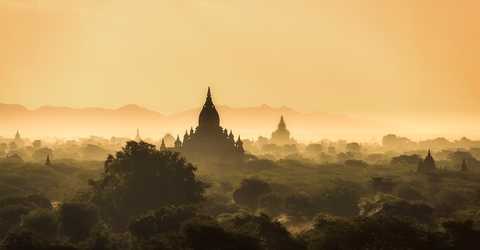 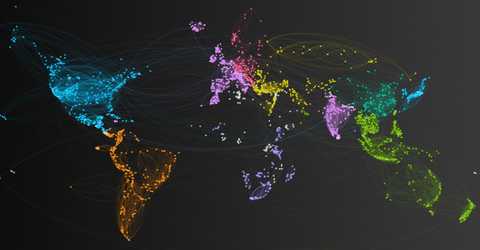 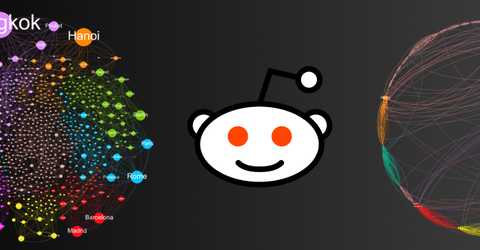